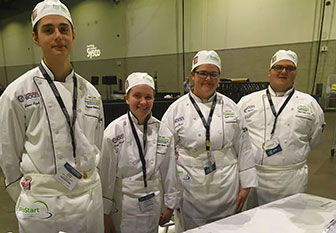 SCS senior Devlan Matthews is part of team of Schoharie County high school students who cooked up a top-10 finish in the National ProStart Invitational culinary competition this past weekend in Providence, RI.

Matthews, who studies culinary arts at the Capital Region BOCES Career and Technical Education (CTE) School in Schoharie, competed against 46 teams and placed ninth in the nation along with students Jovan Afzali of Berne-Knox-Westerlo and Alexia Torres and Katelyn Manchester of Cobleskill-Richmondville.

During the National ProStart Invitational, nearly 400 student competitors put their skills to the test in front of industry leaders, National Restaurant Association trustees, state restaurant associations and family and friends—all with hopes of earning coveted scholarships from the nation’s premier culinary and restaurant management programs.

The students had 60 minutes and limited resources to prepare a gourmet meal that included an appetizer of butternut squash and goat cheese ravioli with brown butter sage sauce, entrée of pan-seared arctic char with tomato butter sauce and dessert of toasted almond ricotta cake with lemon curd and triple berry coulis.

CTE culinary teacher Chef Nancy Iannacone praised the hard work and diligence of the team. “They did a fantastic job and had the support of so many in the community. I am very proud of their accomplishment,” she said.

The Capital Region BOCES team won the state tournament in March and advanced to the national event.