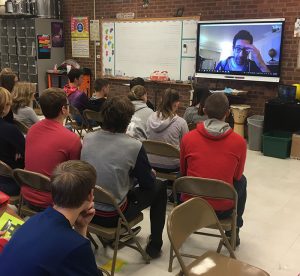 Connecting with students in the SCS band room via smart board video, Klein discussed his career during a question-and-answer session on Oct. 18.

Klein, who was high school classmate of Olin’s, has composed or orchestrated for films including “Fantastic Beasts and Where to Find Them,” “Bao,” “Christopher Robin,” and “Red Sparrow,” along with many others.

“The majority of Philip’s film work has been as an orchestrator,” Olin said, “where he takes the computer-generated score of the music created by a composer and converts it to appropriate and playable music for studio musicians to record for the film.

“Our band recently played a suite of music from ‘Fantastic Beasts and Where to Find Them,’ and Philip was one of the orchestrators on the project.”

The students were able to ask Klein such questions as what his collegiate experience was like, how he got his start in composition, and why composers make certain musical choices for film.

According to Olin, Klein “explained the whole film composition process, starting from initial meetings with the director about the project all the way down to the final mixing with sound effects, music, and dialogue.

“We were also treated to a sampling of music from the upcoming, second ‘Fantastic Beasts’ film, which included some of the themes the students had just played in their concert with some minor alterations to better suit the new story,” Olin said. 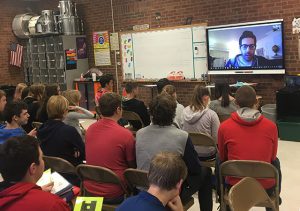