Seventy-five graduates in Schoharie’s Class of 2018 received their diplomas today in a high school gym filled with families, friends, faculty, staff, school leaders and members of the community. 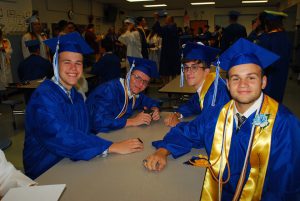 The graduates were recognized for their accomplishments in academics, activities, sports and the community and were encouraged to pursue their dreams while making a positive difference in the world.

The graduates include honored veteran and school crossing guard Robert Klingbeil, who received his diploma through Operation Recognition.

After leaving Schoharie Schools, Mr. Klingbeil voluntarily enlisted in the United States Navy in 1969. He was stationed out of San Diego, Calif. and completed two tours of duty in Vietnam, from June to October 1969 and from April to October 1970. 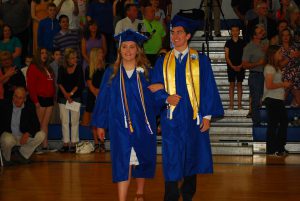 Operation Recognition was established under Section 305 of New York State Education Law to recognize the dedication and sacrifice of WWII, Korea and Vietnam veterans who left school before graduation by awarding them a high school diploma.

To be eligible, an applicant must: have been a member of the United States Armed Forces, and engaged in qualified service during World War II, Korea, or Vietnam; have received an honorary discharge, and be a resident of New York State.