Hannah Meyer and Madeline Phelan have been named Co-Valedictorians of Schoharie Jr./Sr. High School’s Class of 2019. Both students have attended Schoharie Central School since kindergarten.

Hannah is active in school as president of the Class of 2019 and of the school’s chapter of Students Against Destructive Decisions (SADD), captain of the varsity cheer team, and member of Key Club and select choir. She also participates in the 4-H Legislative Intern Program.

Hannah is a member of the National Honor Society.  She has been involved in school musicals for the past four years. In 2018, Hannah played the leading role as Gabrielle in “Cinderella” and earned a Schenectady Light Opera Outstanding Performers Award.

Outside of school, Hannah works as a retail clerk at Howe Caverns and as  a  seasonal landscaper at The Birches at Schoharie.

Hannah said, “I would like to thank my family and dedicated teachers at Schoharie Central School. Their constant encouragement has given me the confidence to achieve nothing but the best again and again. I am incredibly grateful for their support as it has helped push me to where I am today.”

Hannah lives in the Town of Wright with her family. 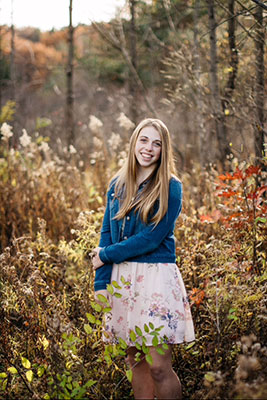 Madeline has been active in school musicals for the past four years, performing in and serving as choreographer for “Bye Bye Birdie,” “Singing in the Rain,” “Cinderella” and “Newsies.”

She is a member of the National Honor Society who was awarded a New York State Scholarship for Academic Excellence earlier this year.

Madeline enjoys working with children and helps out after school in a Schoharie Elementary kindergarten class and in the peer tutoring program. She also has refereed system soccer.

Outside of school, Madeline has been dancing since the age of three. She has been trained in ballet, jazz, tap, modern, lyrical, acrobatic, and belly dancing through Studio North. She also plays soccer year round as a member of travel teams.

Madeline said, “I would like to thank my parents for always pushing me to give 110 percent effort in everything I do, as well as all my supportive teachers.”

She lives in the Village of Schoharie with her family.