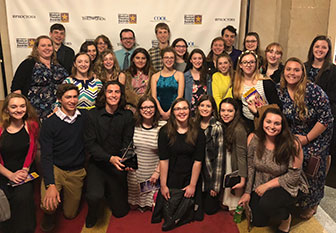 The envelope please. And the winner for Best Supporting Actor is . . .  Jackson VanDerwerken for his portrayal of Jean-Michael in Schoharie’s production of “Cinderella.”

On May 19, several cast members, directors, and volunteers from SCS’s performing arts club joined with their peers from 22 other Capital Region Schools for the High School Musical Theatre Awards ceremony at Proctors in Schenectady.

Christina Kelly, Claire Williams and Jackson VanDerwerken also represented Schoharie at the ceremony by performing in the opening and closing numbers. They worked with professional choreographers and vocal coaches the previous week to prepare for their performance. 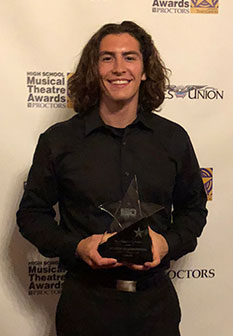 “We very pleased as Jackson VanDerwerken was given the award for Best Supporting Actor,” said SCS music teacher Cassandra Olin. “The cast, crew, directors and volunteers are all very proud of Jackson and his accomplishment.”

The awards don’t end there for our talented students, staff, volunteers and crew. Schoharie’s production of “Cinderella” has received awards in a regional theater competition sponsored by Schenectady Light Opera Company (SLOC).

In the SLOC competition, SCS’s production of “Cinderella” won 3rd place, the entire leading cast was recognized as “Outstanding Performers,” and each member was personally recognized for their performance.

“A huge congratulations to everyone involved in this year’s production. We are proud of our nominations and wins in both competitions,” said Olin.

Presented this past March, Schoharie’s production of “Cinderella” was directed by Cassandra Olin and Kimberly DiNuzzo with music direction by Daniel White, choreography by DiNuzzo, assisted by student choreographers, costume direction by Jill Sholtes, and production assistance by Pam Guest.