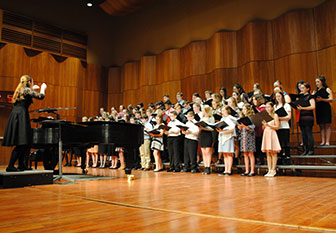 More than three dozen Schoharie High School students were chosen to perform at the Schoharie County Music Educators’ Association (SCMEA) All-County Festival March 15-17 at the College of Saint Rose’s Massry Center for the Arts. SCS students also were among featured vocalists and one received a competitive scholarship.

Interested students were selected by the choir and band managers (other music teachers in the area) based on their local teachers’ recommendations.

“Christina Kelly was one of the two recipients of SCMEA’s annual scholarship for future music educators. It was a wonderful experience and was another opportunity to make music in March, which is ‘Music in Our Schools Month’ across the nation.”

Congratulations to the following student performers: