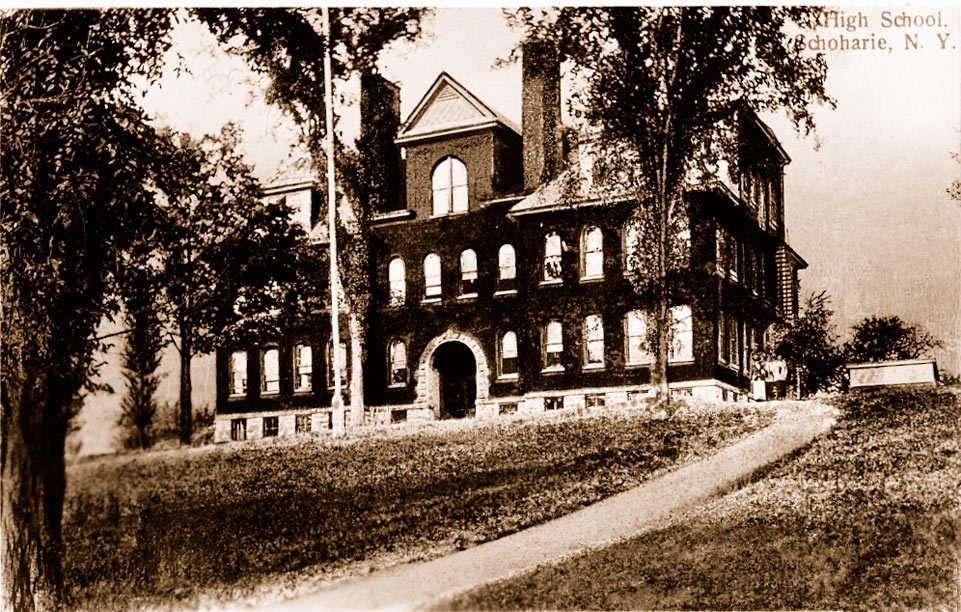 Written in honor of the school’s Bicentennial in 1976

As we celebrate our past and anticipate a happy future, we should think a little about how our schools first came about. Who were the first people to live in our beautiful valley and start to mold it into the Schoharie we know? Many of us are descendants of the first white settlers: the Keysers, Boucks, Rickards, Warners, Weavers, Zimmers, Mattices, Zehs, Bellingers, Borsts and Schoolcrafts; who settled in Brunnen Dorf, one of seven dorfs or villages. We, who live here now, are grateful to those early settlers for making this valley and its schools what they are today.

In about 1708, England’s Queen Anne was looking for a way to increase the population of her colonies. She knew that the Germans were in general peaceable, loyal subjects and lovers of liberty by nature. She offered them free land, tools, and provisions to come to America and increase its numbers. As a further inducement, she would permit them to practice their own form of religion in peace. Her offers tempted thousands of Germans, along with many Dutch, to leave their homelands and start a new life in the wilds of America. These were the first white settlers in Schoharie, the name given to the area now containing Schoharie and several other towns. They arrived in New York in 1710, fewer in number than when they had left the Palatine. After going to Albany to scout around for a place for permanent residence, they found the Schoharie Valley. They obtained land titles from the governor and set out for the valley, their possessions on their back. They entered the valley on a Sunday, and washed in a creek to keep the day by being clean. To this day, the stream is called Louse Kill. The total number of white settlers in Schoharie Valley in 1711 was between five and seven hundred.

Most of the poor German settlers were illiterate, which caused them many problems, including the loss of their land titles. They became aware that their ignorance had brought on these troubles and resolved to educate their young in the best possible way.

Early schools were taught by the men with most education, in log barns. The first German school was started in 1740. Soon after, other settlements started schools. In Vroman’s land, classes were conducted in Dutch. In 1760, instructions were given in English and in some schools, all three languages were taught by one man. There were few conveniences or comforts in the barns and churches which were used in the summers and rude log buildings which were used in the winters. By 1845, there were 216 school districts employing 392 teachers. Shortly after, a County Teachers’ Association was formed and held annual meetings.

The first English school, where Dutch and German were no longer used, was started in 1795 in Fultonham. It was attended by a young boy who was to become Gov. Wm. C. Bouck. Many seminaries were also started, claiming that since they were located in “back” areas, they would protect the students from all of the surrounding “evils.” Most of these schools and seminaries were poorly constructed of wood and often burned, a costly waste of money.

The Schoharie Academy, established in 1837 by an act of legislature, was a co-educational boarding school. It was located on the site of the present high school. It was incorporated by the Regents of the state in 1839 and offered history, philosophy, ancient languages, drawing, and music. The tuition for one year was about thirty-three dollars, not including books and extras. This school was torn down in 1904, when a new school was built housing first through twelfth grades. Around 1838, when the federal government appropriated $50,000 for district libraries, the academy was reported to have had an excellent collection of books, which was passed on to the new school. The books were all lost in a fire which burned the school in 1926.

In 1929, plans were made to form a centralized school district, to include seventeen of the smaller districts.

In November 1930, the formation of the district was approved by the voters, 252 to 110. An architect gave an estimate of $275,000 for a new addition to the building. A bond issue for forty years was approved in March of 1931 by a vote of 363 to 118. The formal dedication was on April 7, 1933. The addition included a new auditorium, cafeteria, and a complete public address system.

For the centralization, seven buses were purchased with the state paying one-half the cost of gasoline and the buses. The enrollment at that time was 655 students, grades 1-12.

In 1952, a separate elementary school was built. Because the district was growing so fast, an addition of four classrooms and a gym was also made on the high school building. A tunnel was built connecting the two schools. As enrollment grew in the 60’s, the district acquired temporary classrooms. By 1970, 13 temporary classrooms dotted the site. Four kindergarten classes also met in the Presbyterian Church Hall.

In February of 1974, a group of parents, teachers, and board members was formed to study the educational problems of our school. It was decided that somehow we should build twenty-four new classrooms and a library, eliminating the portables and the rented rooms in the church hall. After checking out all possibilities it was agreed that a split level addition to the back of the elementary school was the best alternative. The cost of this would be about $1,850,000.

If the addition was built according to state laws the district would be eligible for .78% of the principal and interest in State Aid. An additional $50,000 was expected from the sale of the temporary buildings. As the cost of construction had been slowly coming down, it seemed that this was an opportune time to vote on the bond issue, which could be paid off over twenty years. On June 17, 1975, the voters of the district passed the issue. Construction began soon after. You now see the almost completely finished product. We now have 1,659 students, and are still growing.

The dedication of these new educational facilities in this bicentennial year of our nation gives testimony to the continued commitment of Schoharie citizens to the education of our youth. The proud heritage of the earliest settlers is in good hands.